Please stop by often, and see what develops. If nothing else, take away the notion of trying out Linux. My most grateful thanks go out first and foremost to Linus Torvalds, and to all the individuals world wide that have contributed to the "revolution." Linux is truly amazing, and has become a major part of my life... I use it daily as my primary OS on my work and home machines. Is there a 12-step program for this? Hehehe.

Stay tuned for some exciting additions that I'm working on right now, including:

The personal record on one of my Linux machines was 116 days of uptime. I had at that point received over 85 million packets and transmitted 10 million. It was reset to zero because I installed a SCSI card, upped the CPU from 100MHz to 166MHz and upgraded the kernel to 2.0.33. Oh. That and the power failed...

UPDATE! From my current Linux machine, we see...

Note that the highest uptime I've heard of for a Linux machine was over a few years! Not bad, if you consider that you're lucky if you can keep NT alive for a week.

The funny thing is, I wrote this program basically 2 hours after picking up my first document on tcl/tk, just by "winging it." So, while it's functional, it's not pretty, as there's no error-checking, and there are a few things I'd like to add. Once I finish up this, I'll release the program into the public domain.

My goal is to make custom bitmapped buttons and allow the whole window to be "swallowed" into a toolbar, allowing one-button quick access to all kinds of things, such as the already implemented mount, unmount and eject -- like error checking through fsck, diskcopies, backups, etc. Stay tuned!

There's a lot more software that I've written, which you can access via the navigation page. Among them are "iVote, TkApache and Mohawk."

(The second image is an Enlightenment desktop I'm trying out)

This is the desktop from my machine at home. It's the dual 166MHz Pentium (overclocked to 200MHz), 196MB RAM, Imagine 128 4MB machine with Linux and X windows via Accelerated-X. I totally customized the toolbar at the bottom with the 3dpixmaps package and various other icons from the 'Net. The window manager is AfterStep and the system is totally hacked to emulate the NeXTstep OS using tcl/tk v8.0 and TkStep. Lastly, I've hacked my .Xdefaults and resource settings, system.steprc file and changed many tcl/tk programs to utilitize the wishstep interpreter instead of the regular wish so that even regular tcl/tk programs look NeXT-ified.

Click on the image to go to my desktop page, which features a larger, 640x480 size screenshot JPEG, along with descriptions of a lot of the things you seen on the screen. Some interesting stuff for Linux users to see, and most definately something for Windoze users to see (what they're missing out on!)

For those of you that just want to steal my system.steprc file, there ya go! This file is subject to constant change as I play around with it at home, and may differ slightly from the screengrab above, but it's usually very similar. Right now it is setup for the toolbar above with Win95 like sounds for window actions. Quite a nice setup. I run it at 1152x900 most of the time, but you can run it at a lower resolution. Just watch the toolbar, you may cutoff some stuff if you go any lower (800x600 or 640x480). You can modify the system.steprc file so that the toolbar is on three rows instead of my two if need be. 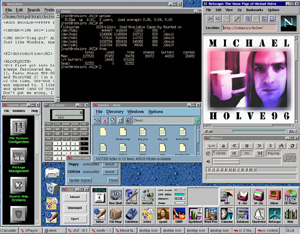 You can also download my previous fvwm2rc95 file
which supports major Win95isms and sound as well
as my raindrop background.

I've put together a web page detailing the setting up and use of the Epson Color Stylus printer with Linux. I have such a setup at home, and initially, it took me a little while to "figure out the tricks" to get it to work perfectly. In trying to give back to the Linux community, I've setup this page to make it understandable to the average lay-person, but with plenty of hardcore technical stuff for those inclined.